Solar power capacity has doubled every few years, and it now accounts for more than ten percent of all power generation in the United States! 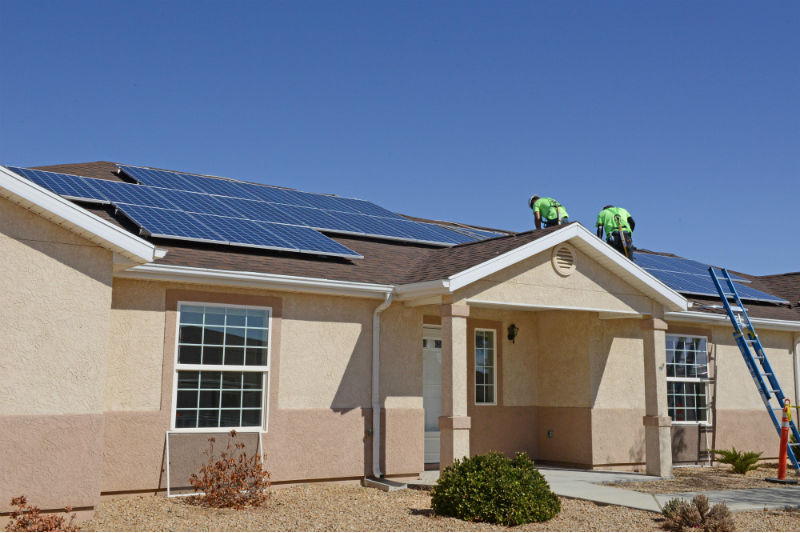 Solar Power is Too Expensive

This misconception is based on a germ of truth. Solar power used to be expensive, while mass production has brought costs down. Tax credits bring the costs down even further. For example, there is a thirty percent federal tax credit on most solar installations. State level tax credits and other incentives can offset the purchase and installation cost of solar panels as well. Net metering can save you money or earn extra income, too. Net metering connects your home and the solar panels to the grid. If the solar panels generate more power than you need, the excess is sent to the power grid and the value of it is subtracted off your electric bill.

I Won’t be Able to Sell My Home

There is a fear that you won’t be able to sell your home if you have a solar system. It may be because people think the solar panels will ruin the aesthetic of the home. In reality, a solar system tends to attract buyers. This is especially true in California, and it is very true for younger home buyers. Having the ability to draw energy from the sun and even selling it back is something that could sway a lot of buyers. You can minimize the risk of problems when selling the property by having panel wiring done inside the home, so that you don’t have ugly wires hanging off the outside of the house. Another solution could be to have sleek solar panels installed on the roof instead of taking up half the yard with a solar panel array.

Others are afraid to install solar panels because they don’t want to sink that much money into infrastructure without receiving a return on their investment. This is no longer true, because some businesses will remove the panels and install them on your new home for you. And the average solar panel array pays for itself in six to sixteen years. The ROI is higher in a state like California than in a colder one like Massachusetts. Take advantage of all available tax credits and incentives, and you could start seeing a return on the investment in two to four years. Solar panels are often avoided because people are afraid that they come with heavy maintenance. That is not true in modern systems. Solar panels rarely require maintenance, though you may need to clean them once in a while. Because the panels work independently, the system will continue to generate power if one is damaged or malfunctioning. Modern solar panels are very durable, so they’re unlikely to be damaged. That’s why they often come with 20- and 25-year warranties. A warranty like this means you don’t have to fix issues when they do arise.

Some people think the solar panels will hurt the roof, since they put a heavy load on the structure. In reality, solar panels can protect your roof. Rain, ultraviolet light and hail will hit the solar panels before they hit your roof. And by sitting a few inches above the roof, they improve air flow over the roof while weighing as much as a second layer of shingles. This misconception is based on the fact that bad installations will damage your roof. For example, bad installers will drill holes in your roof and not care about the damage they cause. That’s why most companies void the roof warranty when solar panels are installed. The solution is to go with a reputable solar company like Semper Solaris, who will minimize the holes in the roof and are guaranteed not to damage it. They also are expert roofers, and will know exactly how to install the panels to protect your roofing, and might be able to make some fixes that need to be made. This will ensure that the solar panel installation won’t harm your home. Understand that solar panels are a relatively new technology and the industry is constantly evolving. Work with a solar power installer who can put in the right solar system for your home and budget.

It Isn’t Worth the Cost

One fear of solar power projects is that it isn’t worth the cost. For example, they think that solar panels won’t work on cloudy days. In reality, solar panels work in almost all weather, and unless it is night, the panels will rarely ever have zero percent production. They’re actually more efficient when the weather is cooler than when it is hotter. You can improve the power output of the solar panels by ensuring that the panels aren’t in the shade. Another reason solar panels may not produce power is that they’re covered in snow. That’s not an issue in a state like California, but in colder parts of the country, installing solar panels at an angle will prevent snow from piling up on top of them. A side benefit of net metering is that the credits tend to roll over to your next billing cycle. This means the solar panels will continue to reduce your electric bill during under-performing winter months.

My Roof Isn’t a Candidate for Solar Power

I Should Wait Until Technology Is Better

This is an understandable concern, since solar panels have become far more efficient in the past few years and are far better than the designs that came out in the 1960s. However, solar panels are starting to hit a limit on efficiency. On the other hand, you can start to see significant savings now if you install the solar panels. Furthermore, you want to take advantage of tax rebates and incentives that are starting to erode. Also know that you can install a modest array of solar panels and expand the system later.

I Won’t Have Power at Night

While it is true that solar panels won’t generate power at night, this doesn’t mean your home will go dark. If the solar array is connected to the grid, you can draw power from the grid at night. If you live off the grid, you can use solar batteries that store energy produced during the day for use at night. Don’t let the modern myths and misconceptions about solar power prevent you from taking advantage of modern solar technology. Work with a good contractor to determine the right system for your home while taking advantage of the available incentives.